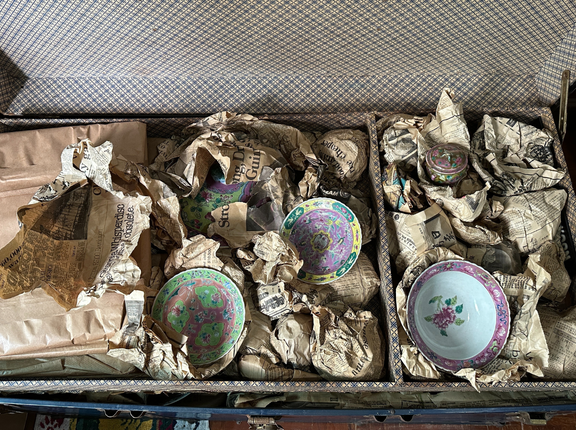 My father and my father’s parents led lives that straddled both sides of the Johor-Singapore Causeway. Grandpa, the son of a Penang-based chemist who had migrated from Tamil Nadu, studied medicine at King Edward VII College in Singapore in the 1920s. He met my grandmother, a trained nurse, also in Singapore. They married in 1935, but apparently the union was not seen as ideal by their respective families, for he was brought up a Tamil Catholic and she a Chinese Methodist. As a compromise, they became Anglicans.

Meanwhile, Grandpa’s supervisors at the Medical College thought he would have a bright career in academic medicine. He had already published a sole-authored study in a local medical journal by the early 1930s. Grandma, however, objected to the plan. It would have involved further studies in radiology, which Grandma feared would render her new strapping husband infertile. In any case, Grandma had other, more prudent ideas. She wanted him to establish a private practice in general medicine: ‘You tap their chests and I’ll tap their wallets’.

Grandma and Grandpa moved to Malacca in the second half of the 1930s to set up their new home and clinic. They had three children between 1937 and 1943. My father, who turned out to be the middle child, was born in 1940. All three were educated abroad at different times during their lives. Papa underwent initial tertiary education at the University of Singapore, and then completed his doctoral studies in Atmospheric Physics in Canada. He then returned to Singapore, where he taught and conducted research at his alma mater for the next two decades. From a vocational perspective, he essentially fulfilled the dream that Grandpa had had to put aside in the interests of practicality.

Like many other middle-class families in mid-century Malaya, my grandparents practised a mix of frugality and investment. Early on as a couple, they were faced with the question of how to furnish their new Malacca residence. They did not want to pay for costly imported European furniture. Instead, they settled on cheaper Peranakan Chinese pieces that were being offloaded by Peranakan families at dealerships in Heeren Street and the like. My grandparents had little inkling that these might become collectors’ items in the distant future. Still, Papa later inherited a few of these pieces, including a mother-of-pearl table screen mirror (Lot 184 in Peranakan & Associated Works of Art).

As Grandpa’s practice picked up, the proceeds were often ploughed back by Grandma into land acquisitions across Malaya. Most of these holdings, including their first home at Durian Daun, were sold at low prices after the Malaysian federal government enacted a new personal income tax law in the late 1960s that backdated assessments to Independence in 1957. My grandparents were caught off-guard by the measure. They simply did not have enough cash on hand to pay the taxman within the stipulated deadline. From Canada, Papa offered to help my grandparents, who appreciated the gesture all the more because Papa was living on a doctoral student’s allowance at the time. Grandpa and Grandma eventually downsized to a more modest detached house in Jalan Melor, taking their old furniture along for the ride.

Returning to Singapore as a salaried university lecturer, Papa developed an early passion for collecting Peranakan ceramics. Perhaps it stemmed from having grown up in a large dwelling furnished with Peranakan Chinese pieces, whereas now he had to settle for staff quarters provided by the university for expatriates, including Malaysians. By the time he began courting my mother in the late 1970s, Papa had already put together an assortment of Peranakan Chinese tableware, kamcheng, vases, and other decorative pieces. There must have been enough material to fill his bachelor pad, for when Grandma came to visit him in the 1970s, she commented that he had ‘so much junk’ in his home.

Where did all the antiques come from? Like other collectors, Papa must have had many contacts and informal relationships with people who knew of such material for sale. He told Mama that before he had met her he had once driven all the way to Muar to purchase a marble table that he had then sent down to Singapore (Lot 187 in Peranakan & Associated Works of Art) The table was so tall that it was finally used to anchor the landline telephone system at Redwood Avenue, and then the internet. We usually had our phone conversations standing up! Other pieces, mostly ceramics, were probably acquired closer to home. Papa was a frequent visitor to the now-defunct Sungei Road Flea Market. He cultivated long-term friendships with vendors. They would put aside incoming items that they thought he would like and let him have first pick. In return, and to maintain goodwill, he would often buy items from them that he privately believed were of little value.

For reasons still unclear to us, Papa eventually shifted his primary interest from ceramics to numismatics. He was already heavily invested in collecting old coins, paper money, and catalogues by the time he met my mother, who had recently arrived from Malaysia to begin work at Singapore General Hospital as a junior consultant. Both had previously completed their postgraduate studies in Canada, each supported by scholarships; his from the Commonwealth Scholars Scheme, hers from the Colombo Plan. But they did not know each other prior to Singapore. It so happened that they were both staying at Linden Drive when they met, thanks to their respective employers’ policy of providing Malaysians with housing. According to Mama, Papa literally picked her up one day. On the way to work, he drove past as she was walking out of Linden Drive and offered her a lift. Several months later, they were married.

After the wedding in 1978, Papa and Mama moved to Redwood Avenue. They had purchased Redwood in the hope that Papa’s parents would join them in Singapore. In the end, however, Grandma and Grandpa decided to remain in Malacca. So, I grew up in a house that was somewhat larger than its adult inhabitants had intended it to be. At Redwood, Papa continued to expand his coin and note collection, housing it mostly in his new study. The Peranakan ceramics, meanwhile, needed a more protective and permanent storage space at Redwood. Mama allowed him to use her trunk from her university days in British Columbia. Papa packed the antiques in several layers, where they sat alongside Mama’s medical qualifications and university keepsakes thereafter.

It was at this point that my personal memories and Papa’s activities converge. I was an only child, born in 1980. Between the ages of five and eight, I remember accompanying him everywhere. There were frequent visits to the Singapore Children’s Society, where he volunteered to tutor kids my age in math. He brought multi-coloured star stickers on each visit to reward his students for good work. I also spent quite a few long afternoons with him at his favourite garage at Pasir Panjang Road, as his car (a Fiat Argenta, I think) was in frequent need of repair. When it was working well enough to be driven, I would journey with him to various antique dealerships in Chinatown and other areas of old Singapore. There was one shop that stood out for me because it specialised in old clocks and timepieces. Dad’s conversations with the shopkeeper were constantly punctuated by ticking, and their chat was regularly interrupted by a surprisingly loud wooden cuckoo clock that went off every half hour.

Throughout the 80s Papa brought us to stay with his parents at Jalan Melor. Once I began primary school in Singapore, we settled into a pattern of three to four visits a year, whenever a holiday period arrived. While Papa wanted to maintain close contact with his parents, both he and Mama wanted me to preserve close ties with our relatives and neighbours since I was still Malaysian, despite going to a Singapore school. During those years, the Jalan Melor home periodically hosted not just us, but Papa’s siblings from Great Britain, as well as their respective partners and children. Occasionally the kids from all these different unions would meet and play together. We probably spent more time running outside the house than inside it, as most of the common rooms were dominated by the angular Peranakan Chinese furniture.

Two pieces from those days stand out very clearly in my memory. The first was an altar table base that had been converted into a coffee table for the reception room, and topped with sheet glass. I was simultaneously repelled yet drawn to the golden kala heads staring at me from the corners of the table. They seemed enormous to a child barely taller than the table itself. The second was a large brass gong housed in the dining/sitting room. I was allowed to beat it with a soft mallet to entertain myself, and apparently my grandparents as well.

Sadly, the 80s were also marked by the deaths of both Grandpa and Papa. Except for a couple of years following Papa’s death, Mama and I continued to live at Redwood Avenue. The first few years following his passing were hard on the family. His study and most of its contents remained largely untouched. Mama’s trunk was never opened again. Before he left us, Papa had also had some of his numismatic holdings stored in two safe deposit boxes at the nearby branch of Tat Lee Bank (now OCBC) at Sixth Avenue. Years afterwards, Mama bit the bullet and recruited me to help her relieve the bank of its heavy stash. We brought two medium-sized suitcases for the task. They turned out to be large enough to house all the material, but not strong enough to take their weight. Neither suitcase survived the ten-minute journey home.

Grandma had outlived my father but grew increasingly frail before passing away in Malacca in 1995. So, while struggling to survive Papa’s death, Mama found herself for a time having to look after me at Redwood, and her mother-in-law across the Causeway, as both of Papa’s siblings remained ensconced in the UK and North America. Before her death, Grandma entrusted Mama with oversight of the Jalan Melor home and its possessions. Following her passing, Mama continued to visit Malacca to ensure everything was kept in order by Grandma’s former carers. The only period that Mama was unable to do so was during the recent Covid-induced border shutdown. By this time, Mama and I had both become Singapore citizens.

In October 2022, we made a joint trip to visit the house in Malacca. Little had physically changed in the intervening period, but it felt like we had crossed a metaphorical bridge. Mama decided to move in with me, my better half, and our two children in November 2022, and started putting Redwood Avenue up for sale. It felt like the right time to start saying goodbye to Papa’s antiques, and those of his parents.

**Selected items from Redwood Avenue & Jalan Melor (listed as lots 143 – 189 in the sale catalogue) are included in the ‘Peranakan & Associated Works of Art’ auction on Sunday 15 January.

Further items from Redwood Avenue & Jalan Melor, including the significant numismatic collection, will feature in forthcoming Hotlotz sales during 2023.**